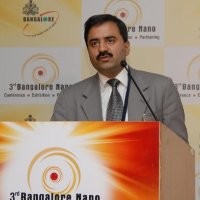 Mr. Puneet Mehrotra,  is the Founder-Director of Reinste Nano Ventures Pvt Ltd and is a member of ‘Vision Group of Nanotechnology’ by the Karnataka Government, headed by Bharat Ratna Prof. C.N.R Rao, with defined vision to promote the ‘awareness of Nanotechnology in India’ and serve the country as a leading Indian nanotechnology consulting body.
Mr. Mehrotra is also the founding member and Director of a number of companies like Nano Science and Technology Consortium (NSTC) and other various companies.

He is the founding member and chairman of Confrere Educational Society and has extensive experience in education, training &amp; scientific publishing industry, with over 250 titles and E- Learning programme initiatives in high-end scientific areas to his credit. An associated member of the Confederation of Indian Industries (CII) in Biotechnology he is actively involved in commercialization of Nanotechnology Business in India. He is instrumental in bringing several Nano-based technologies like –Nano silver impregnation in Textiles, Plastics, Coatings, Ceramics in India.